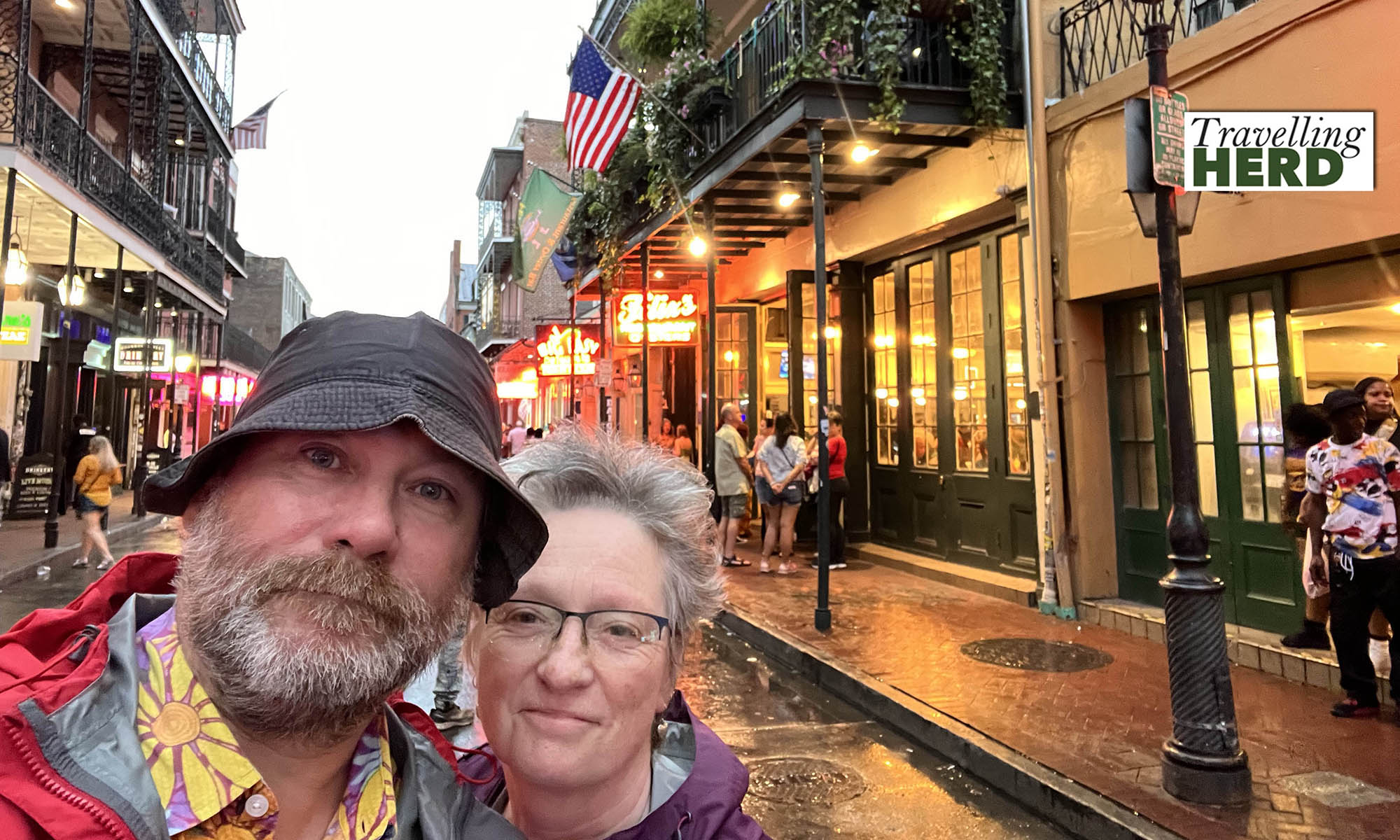 Friday 13th May 2022 We had better views of the mountains from the plane than we had had on the Empire Builder as we flew from the north west down to the south east. But Robert deems flying to be cheating in this respect. We had pre-ordered our in-flight meals and Matilda was pleased to be able to sample more of Beecher’s Homemade Cheese [see Dish of the day]. New Orleans is the party capital of the world and, even though this was not Mardi Gras, we had arrived on a Friday and as we went to check in the lobby was full of students starting weekend breaks. The receptionist made a point of telling us that he had given us a room in a different part of the hotel. Matilda had been alerted to the fact that it was World Cocktail Day, so having deposited our luggage, we walked round the corner from our hotel onto Bourbon Street in search of a suitable hostelry. There is nowhere quite like Bourbon Street [see also Video of the day] where the nightlife starts at midday. We found the Crescent City Brewhouse where Matilda had a Weiss Driver [based on a screw […] 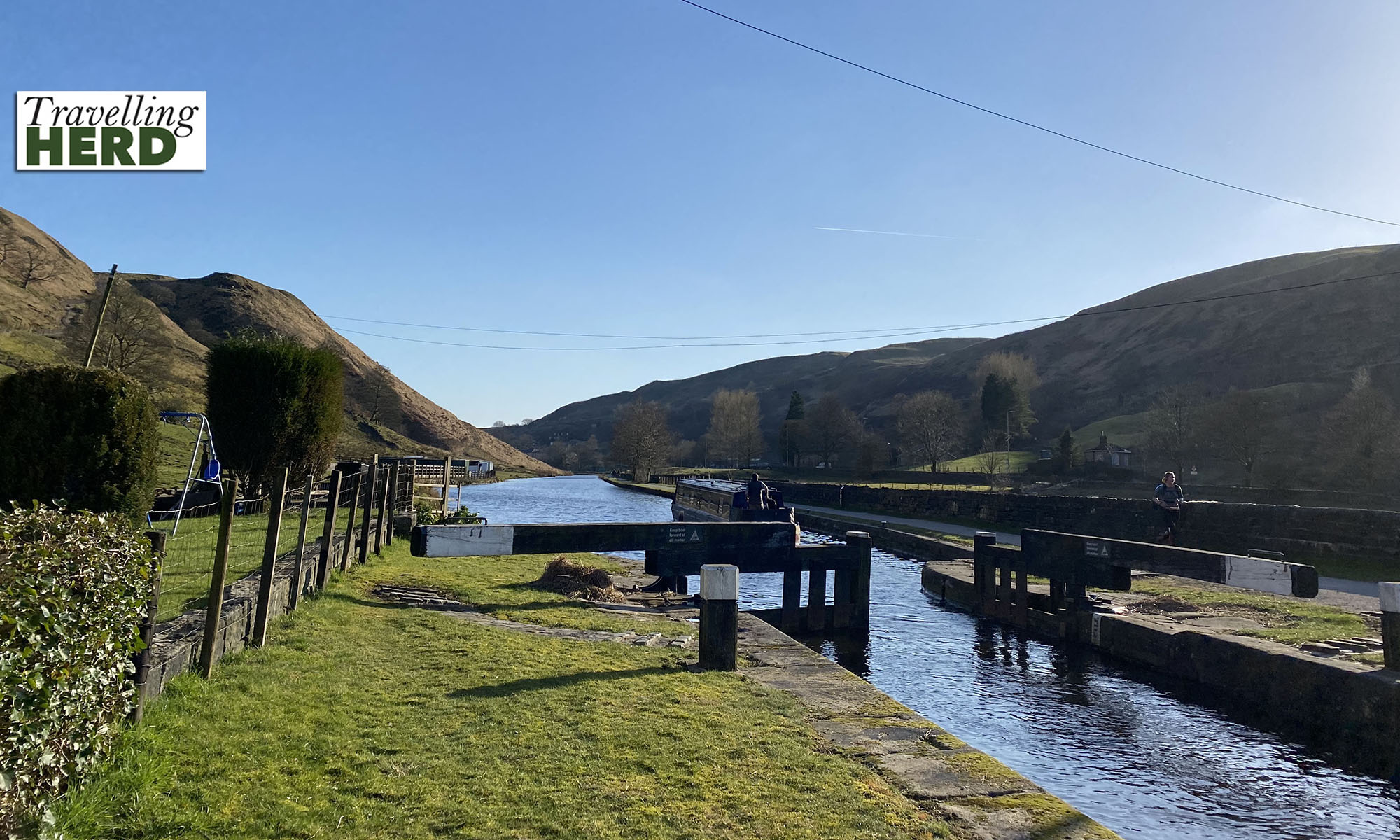 Friday 18th to Sunday 20th March 2022 It was a misty start to Day 31 in Todmorden. Lock 19, on the Rochdale Canal, is right by the main road through the town of Todmorden and when the road was widened in the 1920s the traditional gates were replaced with a guillotine gate at one end to save space. Matilda is unaccountably always a little anxious at guillotine locks in case the mechanism goes wrong. Unsurprisingly, we negotiated the Todmorden Guillotine Lock No. 19 safely and, on the other side, The Duke was dwarfed by the Great Wall of Todmorden. Built in 1881 as a retaining wall to support the railway as it enters the town from Lancashire it is said to contain some four million bricks. We could well believe it. After the Todmorden Guillotine Lock 19 and the Great Wall of Todmorden, we were beginning to realise that hereabouts, the place names are very literal. Research could not provide the background to Shade Lock No. 21 but presumably it is, at least for some of the time, in the shade. Matilda was particularly impressed by the splendid railway bridge with ornate castellated turrets between Locks 21 and 22. This is apparently […]

Monday 13th January 2020 We had an early start for our train journey to Tallinn. As you walk down the platform, the provodnitsa [or provodnik for male] carriage attendants] stand smartly by the entrance to the carriage under their care. Ours was a formidable looking woman who proved, unsurprisingly, to be kind and helpful. Although we were boarding the train at 06:25 it was the sleeper train from Moscow and we found we had a room with two berths, rather than seats. As we had woken early, we did find we were sleepy enough to take a power nap but were woken by our provodnitsa in time for breakfast. There is an hour’s time difference between the two countries so although theoretically we were gaining an hour in our day, the combined border controls and customs checks on each side of the border took around two hours. First, Russian passport control took our passports away then a selection of Russian Customs and Excise staff visited the compartment. One asked us to open our ruck sacks and gave these a cursory glance. Another appeared with a sniffer dog who ignored Matilda’s supply of St Petersburg and Earl Grey tea [you are […]

Sunday, 24th November 2019 As we left our hotel for the next leg of this trip, we told the gentleman on reception where we were going. “Ah, home from home,” he commented. The ferry to Gibraltar leaves from Tanger Med, a new port which is benefitting from an extensive development programme and which is about an hour’s drive from Tanger Ville. Ferries leave Tanger Ville more regularly but serve mainland Spain, not Gibraltar. Robert’s original plan was that we would be able to catch a train to Tanger Med port, but this is part of the massive infrastructure project and the line is unfortunately not yet running. When we arrived at the port, we could see the tracks already laid, directly into the terminal building. It was almost deserted although those few who were travelling seemed to have an inordinate amount of luggage in comparison to the two of us who like to travel light. Buses take passengers from the building to the dockside but the schedule seemed to be rather unpredictable and haphazard. It was nearing sunset when we boarded the boat and Matilda, who had been feeling unwell all day managed to climb the steep stairs up from […] 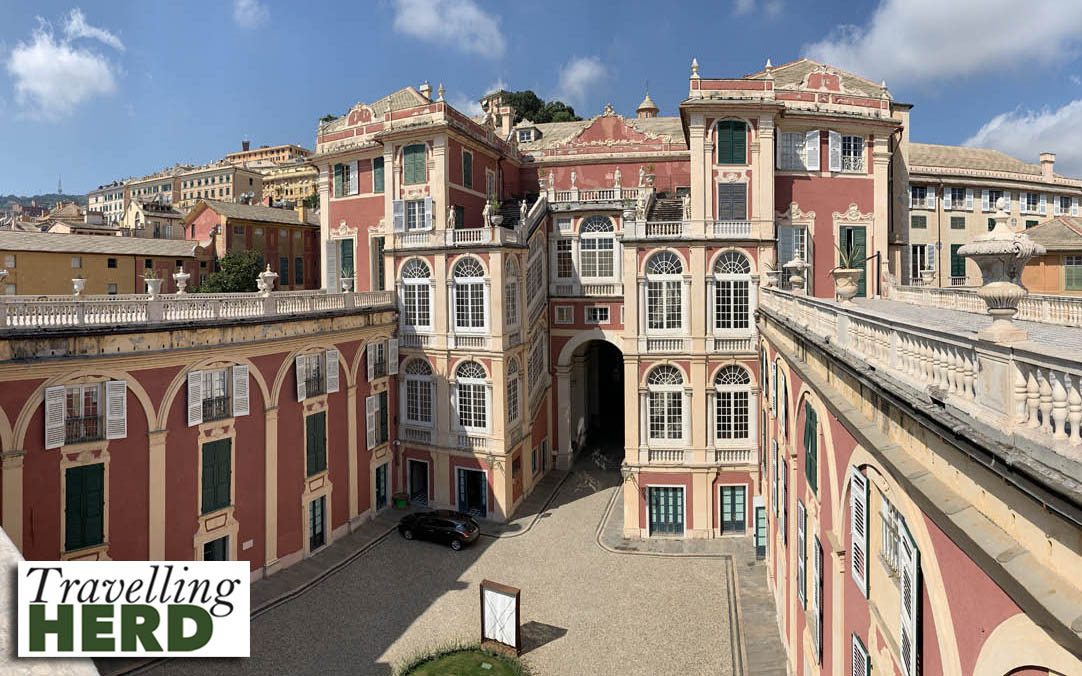 13th July 2019 Genoa is the sixth largest city in Italy and is said to be the birthplace of pesto – that fantastic fusion of basil, pine nuts, garlic and hard Italian cheese which has become both a store cupboard staple and the basis of many delicious, impromptu meals in innumerable households across Europe and beyond. Matilda was therefore determined to eat pasta with fresh pesto alla Genovese in the city which gave it its name [see Dish of the Day]. Having deposited our luggage we strolled into the centre of the city to take in some sights. Genoa has a proud maritime tradition and as well as an historical sailing ship with an outsized figurehead [we assumed fake] . . . . . . there is also a submarine, now part of the Maritime Museum, moored in the harbour area. The town itself has many other attractions including an Art Nouveau public lift which Matilda had identified as a less sweaty means of ascending in extreme heat to see the views, but which we failed to find at ground level. We therefore climbed up a multitude of steps to the top and then took the lift down in an exact […]

Monday 18th March 2019 Before leaving our hotel in Agra, to go to Agra Cantt railway station, we took advantage of the wifi and checked our PNR code. We were surprised that we were in HA1/A/4 and HA1/B/5 [carriage/cabin/berth]. This meant that we had been allocated separate 4-berth cabins. When we got onto the train we discovered that Robert was in a cabin with a couple and a single man. Matilda was in a cabin with a young couple and a free bed. On discussion with the couple and the guard we ascertained that the single man in Robert’s cabin had moved from Matilda’s cabin. This meant that we could actually be together, sharing the cabin with the young couple. However, at about midnight our train arrived in Jaipur and the couple got off. We thought that we had the cabin to ourselves for the rest of the journey. It was then that we had a knock at our door and three men appeared with their reservations to share with Matilda [remember that Robert was supposed to be in a different cabin]. It is actually Indian Railway policy not to mix non-attached males and females in the same cabin. Robert […]

Monday, 22nd October 2018 When we embarked on this trip we knew that we had a maximum of eight weeks in which to travel before we needed to return home for our long-awaited trip to Iceland in search of the Northern Lights. We were also aware of a couple of things which might make us head home sooner than planned. Fortunately motorhoming gives us this flexibility and as one of these has materialised, over the next week we will be heading north and retracing our steps, albeit via different cities, to return to England. Sorting out the rubbish as we left Saverne we found that the sound of a bottle falling into the large municipal recycling bin frightened Ralf. He also didn’t like being put back in Alan in case Matilda went somewhere without him. We have also found that the Navigon sat nav system can be a little unpredictable. The pronunciation of some of the place names is almost incomprehensible, being a combination of the English pronunciation of letters and that of the local country. It also sometimes chooses a very questionable route for us to follow. Today, it tried to get us to join the motorway via the back […] Friday, 17th August 2018 An early train at 07:40 meant foregoing breakfast and we were caught in a rain shower just as we were putting our luggage in the taxi to the station. The rain is the second we have experienced this holiday and was very short lived: it was dry again by the time we reached the station. Bucharest is much more built up and bustling than other places we have visited in Romania, as befits a capital city. We deposited our luggage at the hotel, where we found we could see Ceauşescu’s Palace from our room. With the luxury of two nights in the city, we went on a walk to get our bearings. The walk took us past Coltea Hospital, Cretulescu Church and the National Art Museum. By the time we had walked to the river and Ceauşescu’s Palace to find out about tour prices and opening hours for the next day, then back up into the older part of town, the brunch which Robert had promised Matilda had turned into beer snacks and a cold drink. Unsurprisingly, Matilda found that her freshly squeezed orange juice didn’t really complement the beer snacks as well as Robert’s cold […]