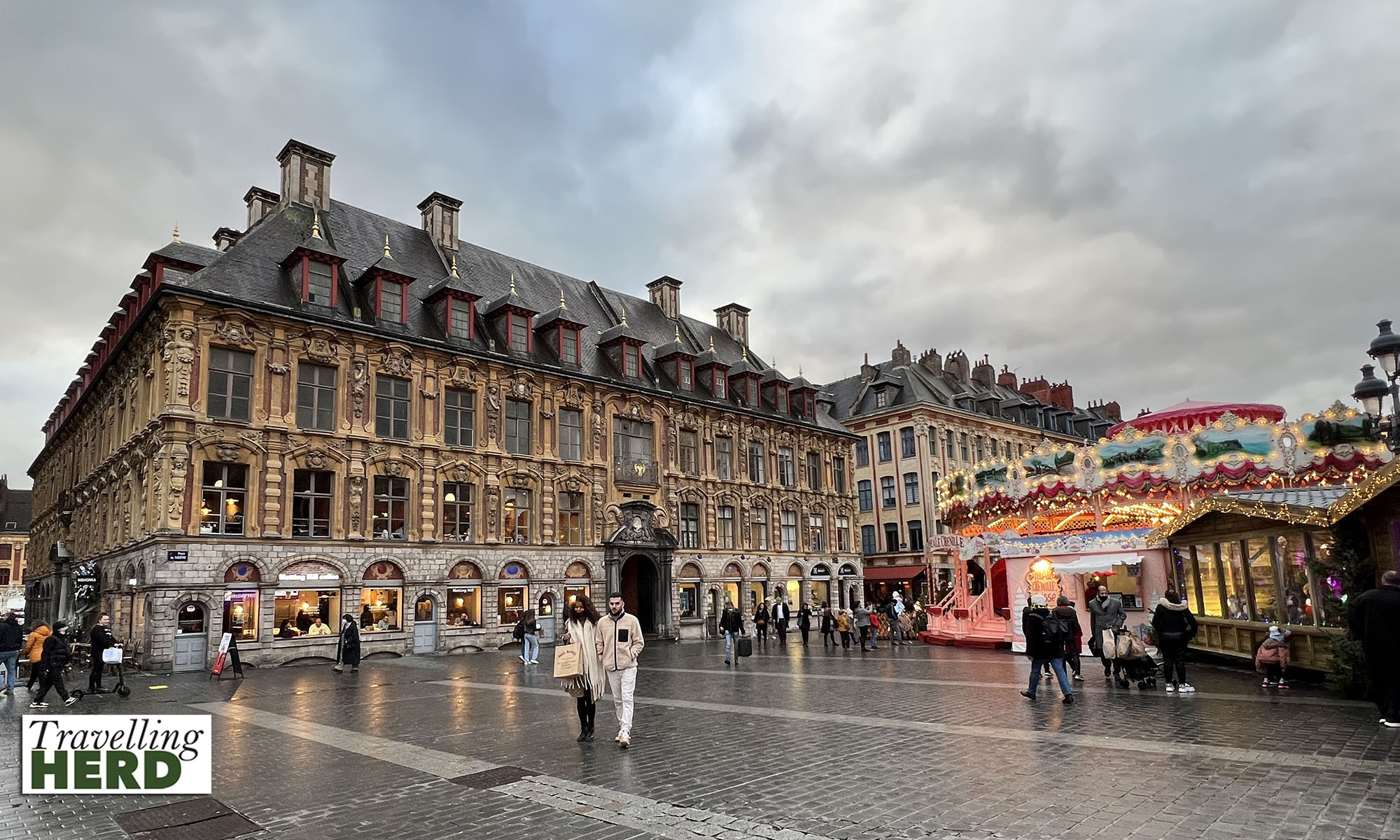 Wednesday 1st and Thursday 2nd December 2021 Although some believe it it be the most important meal of the day, Martin eschews breakfast so while Liz and Martin went to visit the local chocolate museum on empty stomachs, we strolled to the highly recommended That’s Toast. This justifiably famous café provided us with a delicious start to the day in pleasant surroundings served by courteous and friendly staff: it is well worth a visit and we will certainly be returning next time we are in Lille for the Rugby World Cup in 2023. Lille was actually Flemish prior to its invasion by Louis XIV in 1667 and many of the historic buildings are testament to this. Later, walking through the city with Liz and Martin, we passed the Opéra de Lille – a fine neoclassical building completed in 1913. Nearby, the belfry of the Neo-Flemish Chamber of Commerce [or Nouvelle Bourse] rises a commanding 76 meters above the city. La Vieille Bourse, or Lille’s old stock exchange is said to be the finest building in the city, dating from the mid-17th century and it consists of 24 Flemish renaissance houses, all around a central arcaded courtyard. Over 350 years later […]

Thursday 12th September 2019 The plan was to go up the Eiffel Tower early and when we arrived there were signs alerting visitors to the fact that the upper level might be forced to close. We therefore decided to go to the very top first and work our way down. The views are impressive, with the River Seine snaking its way through the city to left and right . . . . . . while the Champ-de-Mars spreads out toward the Place Joffre and the École Militaire. Partly due to its sheer height – the Eiffel Tower measures 324 metres to the tip – even famous landmarks can be hard to identify and we struggled to find Sacré Coeur from the platform at the summit, although we found it could be seen clearly silhouetted against the sky from the lower viewing platform. Apparently Gustave Eiffel built himself a small apartment at the top of the tower where, accompanied by his daughter Claire, he hosted exclusive receptions for important guests. This has been staged to show the visit by Thomas Edison on 10 September 1889, when he gave Gustave Eiffel a model of the famous phonograph which he had just presented […]

Tuesday 10th September 2019 One of the many pleasures of being able to devote more time to travelling is returning to cities and places which we have already visited without feeling we are sacrificing seeing somewhere new. Invariably, each visit is different and this time it was a specific exhibition which inspired us to bring our younger daughter on the Eurostar on her first trip to Paris. The top section of the Eiffel Tower is visible from our hotel room so, having deposited our luggage in the early evening, we took a walk down towards the closest Kusmi Tea shop where Matilda invested in some of her new favourite blend: St Petersburg. It is a variation on Earl Grey with additional hints of red berry and caramel. Mindful of the environmental impact of tea bags she bought loose leaf tea. From here we continued on towards the River Seine and the Eiffel Tower. We had both visited Paris independently before we met and have returned several times since our first visit together in 1992. But none of our joint visits have yet included the Eiffel Tower. This time we have booked to go up all the way this elegant engineering […]

Wednesday 26 June 2019 Ironically, having revelled in the fact that we no longer need to go away during the school holidays and can therefore avoid higher prices, other people’s fractious children and the hottest months of the year, our trip to Corsica and Sardinia saw us heading for Paris in a positive heatwave. Temperatures in Paris hit 34 degrees on the day we arrived, schools have closed, national exams have been cancelled and vehicles are being restricted in the capital to combat pollution. As we arrived at our four star Holiday Inn, close to the Gare de Lyon [which features a picturesque and elegant clock tower] . . . . . . the neon sign on the building next door flashed the immortal words “Sex Shop”. Matilda felt she was stepping back in time to the period before retirement and before she had issued her minimum star requirement for hotels when Robert habitually booked those closest to the station for convenience. Curiously, the areas around the main line stations all across Europe seem to feature establishments which offer this service. Having checked in and applied sun protection we walked to Notre Dame to pay our respects to this iconic […]

Monday, 22nd October 2018 When we embarked on this trip we knew that we had a maximum of eight weeks in which to travel before we needed to return home for our long-awaited trip to Iceland in search of the Northern Lights. We were also aware of a couple of things which might make us head home sooner than planned. Fortunately motorhoming gives us this flexibility and as one of these has materialised, over the next week we will be heading north and retracing our steps, albeit via different cities, to return to England. Sorting out the rubbish as we left Saverne we found that the sound of a bottle falling into the large municipal recycling bin frightened Ralf. He also didn’t like being put back in Alan in case Matilda went somewhere without him. We have also found that the Navigon sat nav system can be a little unpredictable. The pronunciation of some of the place names is almost incomprehensible, being a combination of the English pronunciation of letters and that of the local country. It also sometimes chooses a very questionable route for us to follow. Today, it tried to get us to join the motorway via the back […]

Saturday, 20th October & Sunday, 21st October 2018 About five minutes away from the campsite, Robert heard a noise and suddenly stopped, saying “Something has happened. I’ve hit something.” Looking back Matilda could see a flat black and white shape on the road and feared we had run over someone’s cat. Robert went back to check, recovered one of our shopping bags and discovered that the passenger side door to the “garage space” at the rear had come open and we had lost three out of four of our pads for the levelling system. These can easily be re-ordered, but a pet is irreplaceable. We then arrived at the campsite at Saverne and were allocated a pitch only to find someone else was already encamped there. Matilda checked with reception and we were told to choose our spot. Having identified one which would catch the evening sun from the right direction Robert reversed and renegotiated the site. We realised we had probably not been offered this pitch in the first place because it was very tight, driving down the path, between hedges and fire hydrants to our chosen pitch. Once encamped, we decided to undertake some domestic chores such as […]

Friday, 19th October 2018 We had been undecided about our next stop but when Matilda looked it up, Nancy boasts a UNESCO world heritage square and this swayed the decision. As we were leaving, the pleasant Dutch couple in the motorhome next to us at the aire in Metz recommended only buying fuel from supermarket sites. Unless you are in Luxembourg, of course, where the petrol is cheap. So that is a tip for the future. Ralf seems to have decided that he prefers to be able to see out of the window on the journeys. The aire in Nancy is near the marina again and also just a short walk from the city. These central locations are excellent. We arrived around midday and a slightly disheveled man guided us into a parking place which had disabled markings on the ground so we would certainly not have parked there otherwise. We decided to wait until the capitainerie du port (harbour master) returned at two to pay for our place before heading into the city. He proved to be both pleasant and helpful, had spent time in Potters Bar and Reading and provided a map of the city as well as detailed information […] 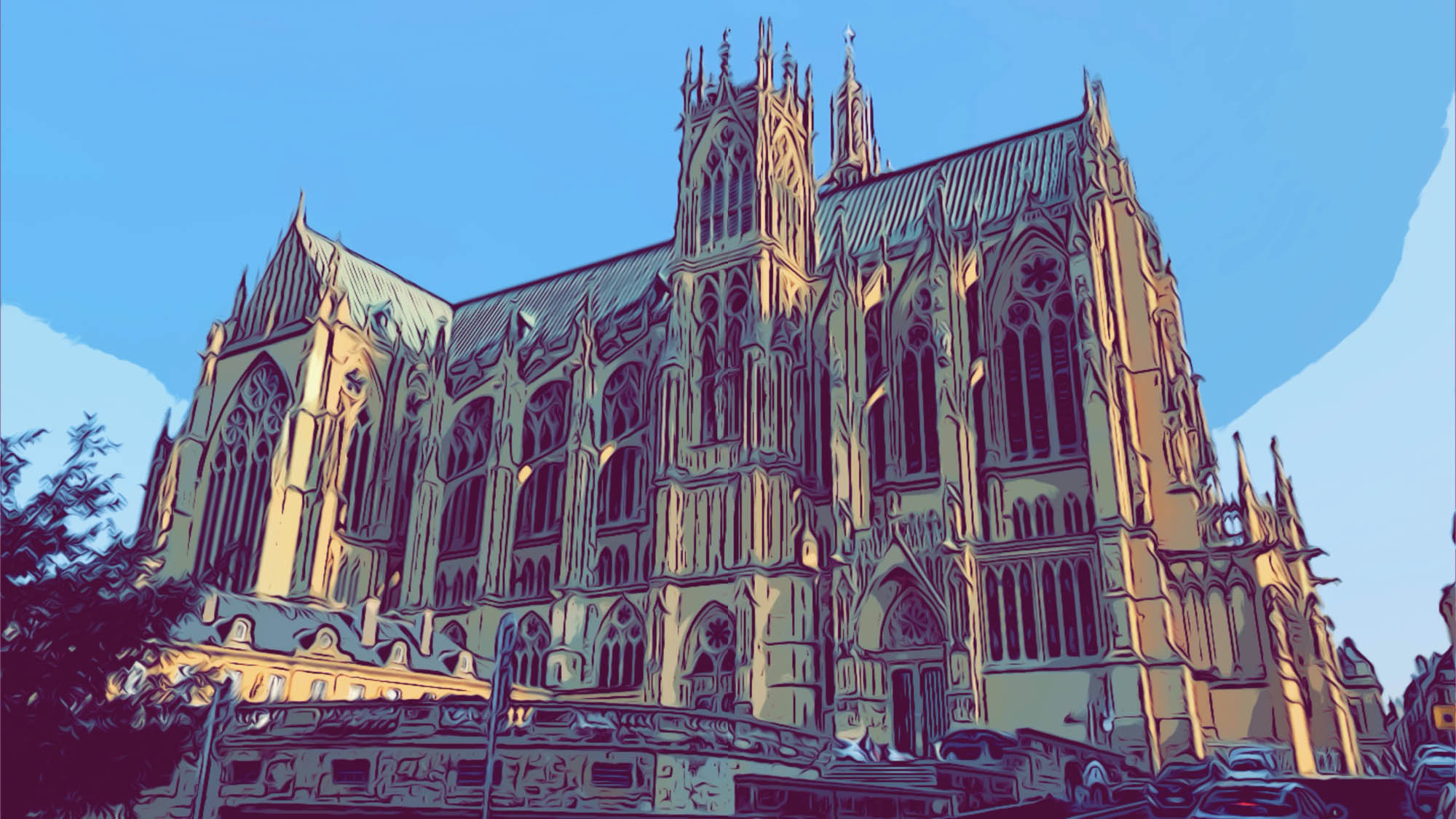 Thursday, 18th October 2018 The guide books say that petrol is cheap in Luxembourg. This explained why, when we first entered the country from Belgium, the road was lined with petrol stations. Slightly belatedly, we remembered this as we were driving out of Luxembourg so we were very pleased to see that an enterprising fuel company has turned what used to be the border control buildings into a petrol station, allowing us to fill up at £1 a litre as we were literally leaving Luxembourg on our way to Metz in France. Metz lies at the point where Moselle and the Seille Rivers meet – a strategic point appreciated by the Romans. The free aire in Metz is by the River Moselle but just a short walk into town. We set off with Ralf, who is always desperate to get out of Alan whenever we arrive in a new place. We realised in traffic today that just the sound of the hand brake is a trigger for him to get excited about the possibility of stopping. We spent about half an hour walking round this pleasant historical city, walking over bridges . . . . . . . and past historical churches . . […]

Tuesday, 7th August 2018 Today we set out on our main train journey of the year. We are travelling over two weeks through the middle of Europe, ending up in the town of Tulcea [Romania], where the River Danube joins the Black Sea at the Danube Delta. This is handy as this is where we will pick up a river cruise back along the Danube to Linz [Austria]. From Linz we will fly back home to the UK. Along the way we will be joined by Ruth and Jaime, who will be flying to Bucharest and then joining us at Constanta for the river cruise. We started with a bus from home in Downe at 06:44 this morning, followed by a train to King`s Cross St Pancras [#1 of 15]. At 09:22 we caught the train to Paris [#2 of 15]. This allowed us to have a nice leisurely lunch of salad in Paris. Obviously we had to have our first chilled beers of the tour as well. Cheers. At 15:55 we caught the train from Paris to Munich [#3 of 15]. This is a five hour event so Robert made himself quite at home surrounded by technology and beer […]