Tuesday started with a short tunnel and . . .

. . . we left Newbold with the sun trying to break through behind us.

We are not sure quite how much Ralf can see but he seems to like the plastic “dodger” down to be able to smell the world as we go by.

The Oxford Canal was originally a winding contour canal which was subsequently straightened in various places to cut 14.75 miles off the journey to improve efficiency. The picturesque cast iron bridges, inscribed Horseley Ironworks 1828, mark where the meanders and loops were bypassed to make a more direct route.

Generally there is a strict division of labour – Robert steers and Matilda, who struggles with left and right, deals with the locks. However Matilda has noticed that, since coming up a flight of locks with another couple where the man steering slowed by the steps long enough to get off to close the lock gates behind them, Robert has started to adopt this practice. In return she will accept the responsibility of steering, briefly, during Robert’s comfort breaks. She might also provide fewer hot beverages.

Today’s journey included one swing bridge and one lock. As we approached the bridge a man sauntered past and offered to open it for us so Matilda didn’t get the chance to learn how to work one and see how much strength is required.

The contrast between this historic waterway trade route and the modern world is striking at times.

Continuing on our way we came across another boat turning round – Drifting Angel from Llangollen – and it led us all the way to Hawkesbury. We had been thinking that we would have to take the time to refill and empty the lock again. As we approached the captain of the Drifting Angel had just opened the lock gate but then proceeded to wave us in as he was going to fill up with water on the opposite bank. We offered to open the paddles to refill the lock for him afterwards but he airily dismissed the idea saying “no need”.

We soon saw why.

The stop lock at Hawkesbury Junction joins the Oxford Canal to the Coventry Canal, thereby linking the two oldest canals in the UK. When the junction was moved in 1803 there was an unintentional disparity of seven inches between the level of the two canals and this had to be reconciled with what must surely be the smallest lock rise in the world.

Hawkesbury Junction is apparently known locally as Sutton Stop after the Sutton family of lock keepers who were based here for over half of the 19th century.

Having turned into the Coventry Canal. . .

. . . we moored up, and happened to met the couple on The Earl. We had considered hiring this boat but we needed the cruiser design with the “dodger” rather than a more traditional stern as we had to be sure our visually impaired dog could not walk straight off into the canal. Matilda confessed to some narrowboat envy as, peering through the windows, [we had been invited on board to look] The Earl seemed to have much more modern fixtures and fittings than The Duke.

The attractive Roving Bridge at Hawkesbury Junction is dated 1837.

The Greyhound is a wonderful lock-side establishment with multiple bars and much WWII memorabilia. Robert pronounced that it served a very fine pint of Bass whilst Matilda felt she had suffered enough wind with the two recent storms.

Even Ralf approved of this dog friendly pub.

A trompe l’oeil painting [now rather obscured by the outside marquee installed no doubt during the pandemic] shows an open door to a pub populated by canine clientele with a landlord named Herr Chaser offering Bumschniffer Lager, Pawsecco and Hair of the dog.

Robert makes a point of reviewing the next days route and checking The Canal and River Trust website for any new navigation closures such as those caused by fallen trees after a storm or damaged lock gates. He also works out where various tasks can be done, such as shopping and recycling, filling up with water or diesel or Elsan emptying.

Our friends Liz and Martin passed on a handy hint which they in turn had been given by a seasoned narrowboat owner. You can order anything you need via Amazon for delivery to a designated Amazon Hub simply choosing a pick up a couple of days ahead on your route to give time to arrive. We decided to take advantage of this when Matilda lost one of her gloves and Robert placed an order for new gloves for us both and a jerry can [another handy hint we received was to fill a jerry can with diesel when you filled up as security].

Our first stop of the day was to collect the Amazon delivery. TSA News and Wines seemed surprised that Robert was using the store as a pick up point but the owners seemed pleased to have his custom.

Our next stop was to fill up with diesel from Springwood Haven which has a beautifully landscaped marina, helpful staff and an excellent shop and chandlery.

Continuing on a full tank, a little further on a helpful woman walking her dog told us that there was a fallen conifer in the canal round the next bend and that we might not be able to pass. This obstruction had not been on the The Canal & River Trust website but, when we got there we found that either The Trust or other canal users had already dealt with the obstruction. Freshly cut branches showed where men had been at work, clearing a space just wide enough for a narrowboat to pass.

. . . to our mooring spot for the night opposite The King’s Head in Atherstone itself. The pub does have its own visitor mooring but as this only really gives access to The King’s Head itself we did not think this would be a suitable spot from which to walk Ralf in the morning.

Even though hail had been forecast, the next day dawned brightly and . . .

. . . we set out in sunshine but took the precaution of donning waterproofs.

There are some very artistic narrowboat owners. We particularly liked the creative use of old tyres on the Brenda May which featured a dragon on the front and a blue parrot on the stern.

The route took us across an aqueduct over the River Tame.

We went straight on at Fazeley Junction.

The hail and high wind which had been forecast did indeed materialise and we were forced over to the bank.

Where we had to wait until it eased before we could continue on to Hopwas where we moored for the night. Here we had a choice of two pubs – The Red Lion and The Tame Otter. Robert preferred The Red Lion and the deciding factor proved to be that the WiFi was better there. 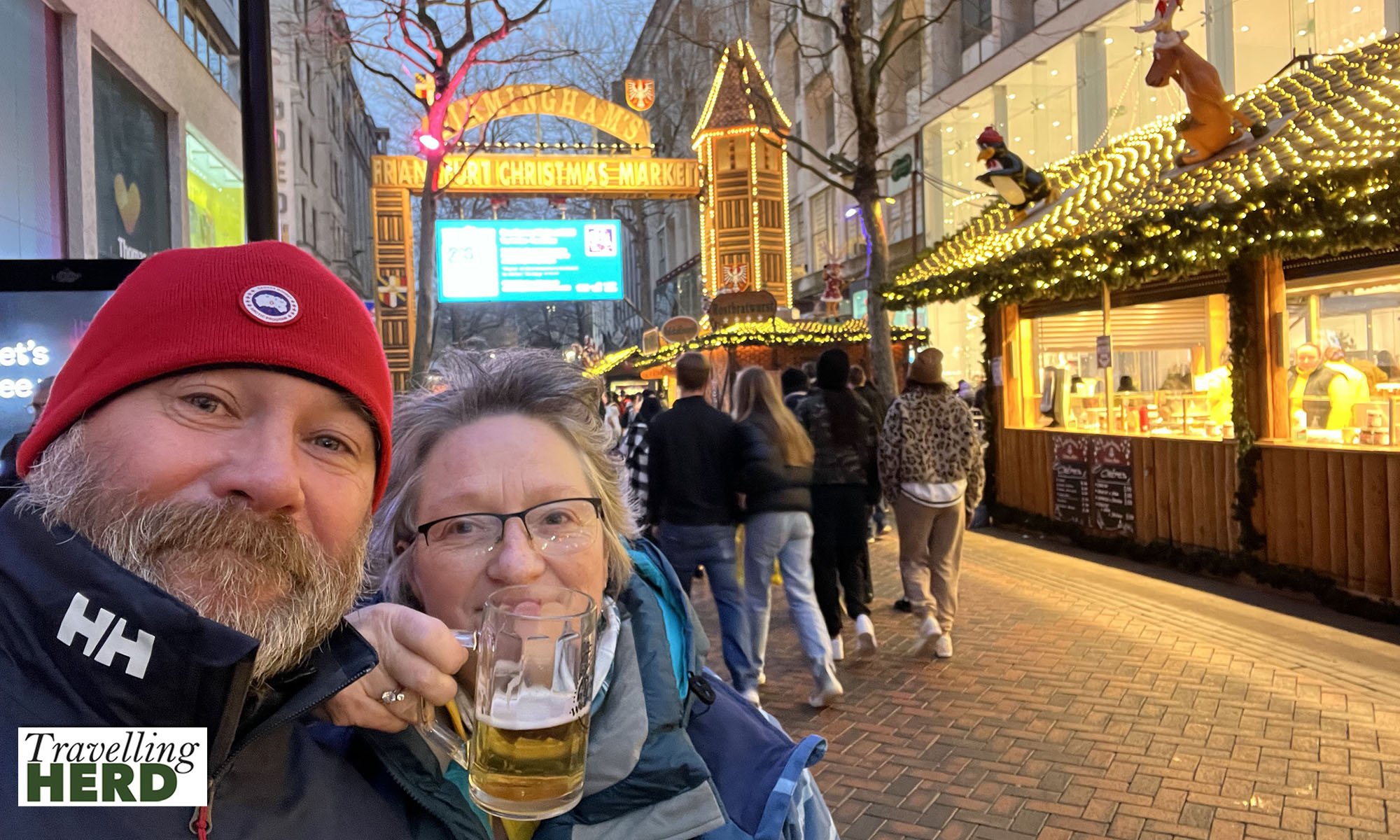 Monday 5th to Thursday 15th July 2021 Southwold seems to be becoming an annual event now that we have a motorhome/campervan and, […]

2 thoughts on “Narrowboat Adventure #3: The smallest rise in the world”