We had originally planned to avoid any travel restrictions by going to Bath for the Christmas markets, but when restrictions lifted in the autumn our regular travelling companions, Liz and Martin, wanted to go further afield and we planned a trip to Brugge for three days, travelling back via Brussels and spending one night in the capital.

However, as the date of our trip approached, Omicron cases were on the rise and countries were starting to impose more rigorous travel restrictions. Belgium implemented PCR tests and self isolation for those staying in the country for over 48 hours. We were therefore forced to revise our plans, reducing our time in Brugge by a day and travelling back via Lille in France instead of Brussels so that we were compliant.

Liz and Martin were excited about taking their first trip on the Eurostar.

Once in Brugge, we deposited our luggage then set out to get our bearings again and see the city as the sun went down and the light started to fade.

The Markt, or old market square, is dominated by the 83 metre high Belfry and surrounded by old guild houses with colourful stepped gables.

One of Robert and Matilda’s favourite places in Brugge is ‘t Brugs Beertje which they affectionately refer to as “Bar Bertie”. It has a well-earned reputation for being one of the city’s best beer bars. We sampled a mere fraction of the 300 Belgian beers on the menu – that comes out at one for every one of the 300 years it has been serving the local community.

Frequented by beer aficionados, Eddie, sat at the table next to us, was the coolest customer that night.

The fine Belgian beer filled us with a feeling of bonhomie and Martin in particular seemed to embrace the festive spirit and exude goodwill towards men.

The following morning we set out to do some sightseeing and went to the Brugge Vrije Stadhuis or City Hall in the picturesque Burg Square, where there was formerly a fortified castle.

Built between 1376 and 1421, the interior was restored between 1895 and 1905 and the greater and lesser council chambers were merged to form a single, splendid Gothic Hall featuring a double vaulted timber ceiling and nineteenth centruy murals started by Albrecht De Vriendt depicting the history of Brugge.

Unfortunately Albrecht died suddenly in 1900 and the murals were completed by his son Samuel and his brother Juliaan.

Despite several previous visits we had no idea that the concept of a lottery was first conceived in Brugge in 1441. An exhibition was being set up to celebrate the anniversary of this momentous invention.

You can also visit the original courtroom and council chamber of the Liberty of Brugge featuring an imposing fireplace and detailed wooden carvings which are impressive from any angle.

The Basilica of the Holy Blood [below left] lies next to the City Hall and has a curious, almost domestic entrance. The Basilica comprises two chapels. The lower one [below centre] is a dark and almost windowless Romanesque building whilst above is the Gothic sixteenth century Chapel of the Holy Blood where the relic is housed. The blood was allegedly collected by Joseph of Arimathea and brought back from the Holy Land by Thierry of Alsace in 1157. The relic is on display on a small platform up a short flight of stars. Although Matilda wanted to inspect the decorative reliquary, she did not feel she could feign faith in front of the woman who sat scrutinising all those who passed.

From here we went to The Beer Wall, which as you can see is very aptly named. Comprising a bar and shop it is now also home to the Tintin Shop.

The Church of our Lady is both church and museum and there is a charge to go into the area which contains the most impressive piece of art on display here – the Madonna and Child. Here we parted company with Martin and Liz, agreeing to meet up later at the Beguinage and to sample some more of the local ales.

The Church of our Lady itself has survived wars, fires and was publicly auctioned during the French Revolution. A series of paintings by Pieter Pourbus show the families of those commissioning the works. Poignantly, the children who had already died at the time of the painting are identified by a red cross in their parting.

There are several brick-lined graves on display in the museum, some below the level of the church floor. Around about 1270, it became customary in Brugge to paint the inside of these sarcophagi. Typically the Virgin and Child were painted by the feet and the crucified Christ at the head. On the side walls, there are often angels with incense burners to accompany the deceased’s soul to heaven. In the Middle Ages, the dead were often buried the same day they died, so the tomb painter had to work quickly, crouching in the grave, where he painted freehand directly onto the wet, quick-drying lime.

This cannot have been a pleasant working environment.

The main attraction is Michelangelo’s Madonna and Child which sits on the altarpiece of the large chapel on the south side. It is the only Michelangelo sculpture that left Italy during the artist’s own lifetime: having been bought in Florence by Flemish merchants, Jan and Alexander Mouscron, who donated it to The Church of Our Lady. Much coveted, it was first stolen by the French in 1794 but was returned in 1816 after the defeat of Napoleon. It was then removed by the Germans in 1944 and its recovery was the subject of the film The Monuments Men. It was returned to its rightful place in The Church of our Lady in Brugge on 12 November 1945 and has remained there ever since.

From here we dropped in to Sint-Salvatorskathedraal which was originally a parish church but was granted cathedral status in 1834.

The Princely Beguinage of the Vineyard was founded in 1245. Beguines were women who wished to adopt a religious lifestyle outside a convent but there are none living here anymore. The Beguinage is an extraordinary oasis of calm within a modern city and the layout is much as it would have been at its foundation although the buildings are more modern.

While we were there Liz’s father, David, kindly transferred some cash electronically to buy a round and Liz maximised the benefit by ordering a paddle of samples [below centre] at Bieratelier Brugge for us all to share. Cheers, David.

From here we strolled through the streets . . .

. . . to return to The Beer Wall to sample some coconut beer served in, of course, a coconut shell.

Belgium is of course renowned for its chocolate which comes in all shapes and sizes.

After eating, we made our way back past the Christmas Market which was very quiet and . . .

Due to the change in regulations, we had to leave for France in the morning so that we did not remain in Belgium for more than 48 hours. Next stop Lille. 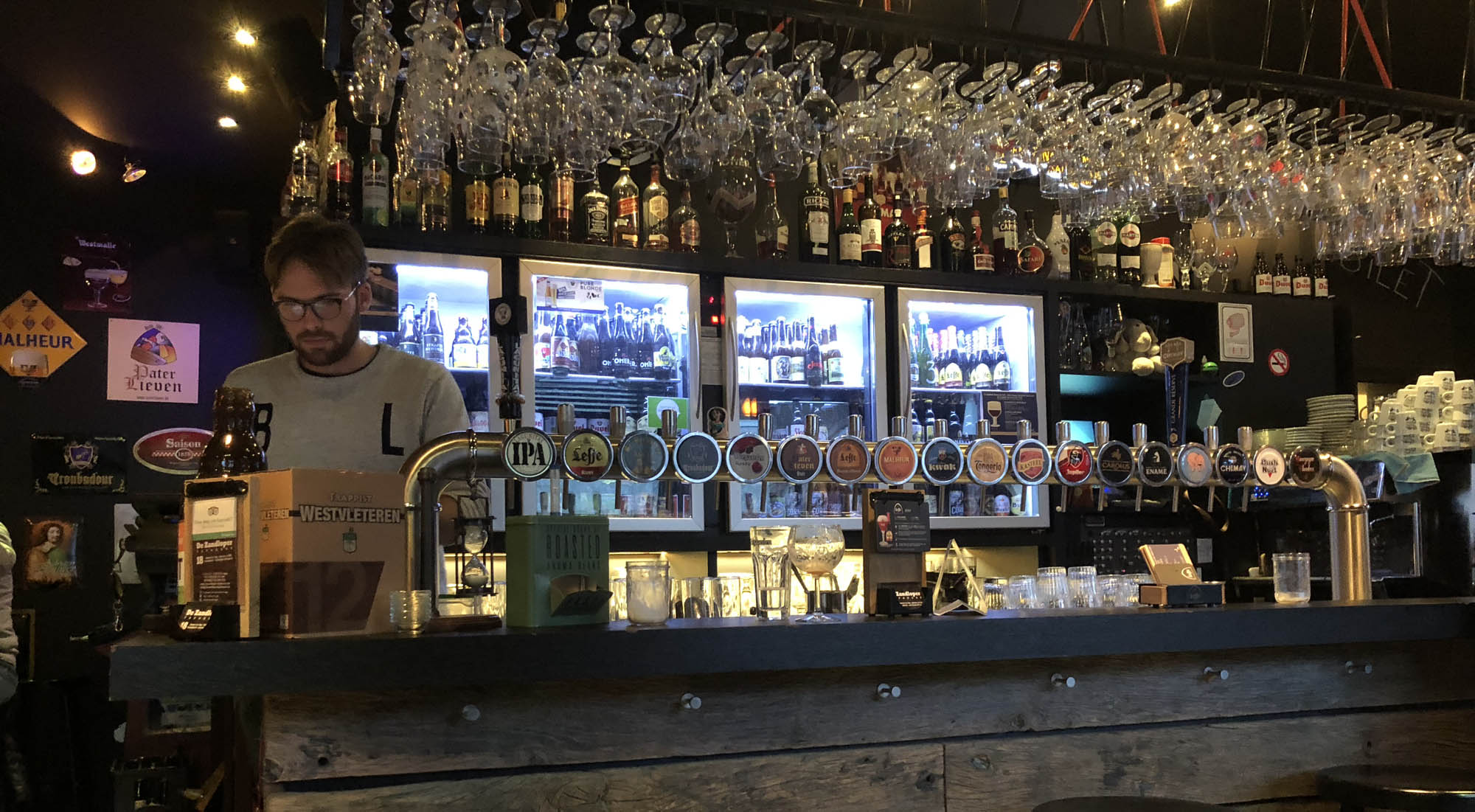 Sunday, 28th October 2018 Our journey to Brugge was marked by a number of events. The first of these was a very […]

One thought on “Christmas Market in Brugge, the home of the lottery”