We had prioritised the places we wanted to see and decided that a three day vaporetto pass, activated at about midday, would give us the flexibility to go into Venice several times and also visit some of the other islands over a period of four days.

Information displayed at all the vaporetto stops explains that ‘between September 15th and April 30th the local administration operates a Piano di Viabilità Pedonale [Pedestrian Mobility Plan]’ based on erecting temporary, elevated walkways in the case of Acqua Alta, or exceptionally high water. This phenomenon, caused by unusually high tides, used to occur approximately every four years but since 2000 it has become much more frequent as sea levels rise due to global warming.

The temporary walkways are constructed out of the sort of staging that schools use for drama productions and these can be seen stacked around the city close to where they will be needed. The routes are apparently effective for water levels rising up to about 120cm but beyond this even some of the walkways may be impassable if they are either submerged or floating.

Robert has met Cinza, a local Venetian guide, through his work as a tour manager for Great Rail Journeys and Rail Discoveries and she kindly agreed to meet us between tours at 14:00 to share some of her local knowledge. Wanting to activate our passes around midday, we first took a stroll around Burano and then caught the vaporetto into Venice.

Despite several visits to Venice in the past, neither of us had ever visited the Palazzo Ducale [Doge’s Palace]. Disembarking at Fondamente Nove, we first walked through the crowded streets to Piazza San Marco to assess the queues for the Doge’s Palace.

Here we saw the Piano di Viabilità Pedonale in operation. In many cities, there is a swift trade in emergency ponchos in the rain and here in Venice we were amused to see that emergency wellies are also available.

Sadly the high tides threaten the fabric of Venice but it was nevertheless quite something to see the lagoon bubbling up through the drains [see Video of the day] and this iconic square reflected in the water.

Even Matilda, who loves indulging in coffee and cake in the beautiful surroundings of historic cafés, did not feel that the eighteenth century Neo-Baroque interiors of the Caffé Florian justified spending almost €12 on a bog standard coffee when outside San Marco was partially submerged.

Instead we found a small café just off the main square and paid a much more reasonable €2.50 each for a cappuccino while we waited by the gondola stop where we had agreed to meet Cinza. We were grateful for the time she spent with us sharing her knowledge.

As the rain then set in and the tourists brandishing umbrellas presented a threat to our eyesight, we sat down for some liquid refreshment and planned the next day’s activities. We decided to get up and out early the following day to try and ensure we could either get straight in to see the Doge’s Palace or book timed tickets for later in the day and adjust our plans accordingly.

Having caught the 07:55 vaporetto from Burano on Saturday morning we arrived at the Palazzo Ducale before 09:00 and took our place in the short queue which had already formed to buy tickets for the day. There were only about a dozen people in front of us and we were able to go straight in and therefore found ourselves ahead of the crowds.

It is impossible to do justice to the intricate history of this building here but we will provide a snapshot of the things we enjoyed.

Loggias around the inner courtyard of this Venetian Gothic building enclose the three sides to the east, south and west. Started in 1340 it has subsequently been extended and modified. As well as being the duke’s residence, the building was the centre for legislation and justice for the Republic of Venice.

Along the corridor up the first flight of stairs are a number of characteristic lion-head letterboxes. A sign explains that from the sixteenth century onwards, people could post anonymous denunciations of crimes or misdeeds. On the other side of the lion’s mouth, the denunciation fell into a wooden box which opened directly into the office responsible for the matter concerned. Unsurprisingly the signs stated that ‘It should be pointed out that only very rarely did the government act on such accusations, and only after careful investigation.’

From here, the richly decorated stucco Golden Staircase leads to the upper floors and a series of splendid, ornate chambers for the various council and senate meetings which often seem to have numerical names. These include the Four Doors Room; the Chamber of the Council of Ten and the Chamber of Quarantia Civil Vecchia.

The Chamber of the Great Council is 53m long and 25m wide and therefore one of the largest rooms in Europe.

The rooms contains beautiful artworks, including the longest canvas painting in the world, Il Paradiso by Tintoretto as well as statues of Adam, Eve and Mars the warrior.

Since the 16th century, the interrogation rooms in the palace have been linked to the prison by the Bridge of Sighs, so graceful and iconic from the outside and so enclosed and oppressive on the inside.

All the rooms involved the the administration of justice are linked vertically with the prisons at the lowest level below the advocates’ offices then the Chamber of Quarantia Civil Vecchia [Council of 40] and the Hall of the Magistrates of Law.

We were intrigued by the number of cells since a sign earlier on the tour had stated that the Republic of Venice was governed well and there was very little crime. Apparently Casanova was imprisoned here at some point.

The tourist route through the palace takes you over the Bridge of Sighs twice. As you enter the prison cells on the city side there is little to see but on the return on the Grand Canal side, there is a tantalising view of the blue sky and waters of Venice.

We passed the Lorenzo Quinn sculpture, Baby 3.0 – a mesh baby nestling in the cradle of a pelvis – on the vaporetto and, having visited the Palazzo Ducale, we wanted to try and get closer. It is on the Grand Canal, directly opposite the Peggy Guggenheim, but it is much more difficult to locate on foot.

When we arrived, we were the only people there and, much as at the villa on the Brenta, we were beckoned in as a welcome distraction by the lone security guard. He encouraged us to get close and touch the sculpture [see Selfie of the day].

On his website Lorenzo Quinn says: I wish that, if my art does anything, it provokes actions of kindness which will give hope to the world. Not a bad ambition.

We aimed to made the most of our three day vaporetto pass and enjoy time on the Grand Canal. We felt we could happily spend hours travelling the different routes, simply watching the scenery go by.

We therefore took a short trip across to see the Basilica di Santa Maria della Salute [the dome in the picture below] which was built as a votive offering following an outbreak of the plague and is currently partially enclosed in scaffolding hence the long distance view.

From here we visited the Basilica of Santa Maria Gloriosa dei Frari, an elegant gothic Franciscan church with an embarrassment of artwork including paintings by Bellini, Titian and Vivarini.

Cinza had recommended the Scuola Grandi, similar to a guild hall in concept. Members came from the middle classes. Venetian aristocracy had become a caste in itself and a nobleman could not join a scuola unless they renounced any role in the government. In addition any patrician Venetian who did not marry within the nobility would be stripped of  their rank. Inbreeding is not necessarily a good thing.

La Scuola Grande di San Rocco is famous for a cycle of paintings by Tintoretto which cover the walls and the ceiling of the Sala Capitolare.

Matilda has wanted to visit the Isola di San Michele ever since watching the Nicolas Roeg film of Daphne Du Maurier’s Don’t Look Now. We decided we could take a vaporetto to our mooring on Burano via Murano and Cimitiere.

Close to the cemetery you pass Dante’s Barque – a sculpture by Gergy Frangulyan representing Virgil and Dante who travel through the underworld in Dante’s Divine Comedy.

Chiesa Di San Michele in Isola and a monastery lie on the island and the walled cemetery and cloisters are unsurprisingly peaceful.

Under French rule, it was decreed that burial on the main Venetian islands was unhealthy for the living and San Michele and the neighbouring island of San Cristoforo have been home to Venice’s dead since the early nineteenth century. The canal between the two was filled in in 1836.

Amongst the monuments Matilda found the last resting place of the poet Ezra Pound.

Many of the graves are marked by enamelled photographs and plastic flowers. The photographs provide a permanent memorial to the dead whilst the plastic flowers seem to indicate that people have visited once and never again. Where fresh flowers were dying, it seemed at least someone had visited a loved one recently.

Matilda was a little overeager and disembarked on Murano at an earlier vaporetto stop than Robert had planned so we took a short walk across the island past the shops displaying the eponymous glassware, some incredibly beautiful and some considerably less appealing.

By chance on Murano, we met Liz and Martin, also returning from Cimetiere, and enjoyed a beer with a view before catching the vaporetto back to Burano and eating at Campiello del Principe the only trattoria which seemed to be open after 18:00. 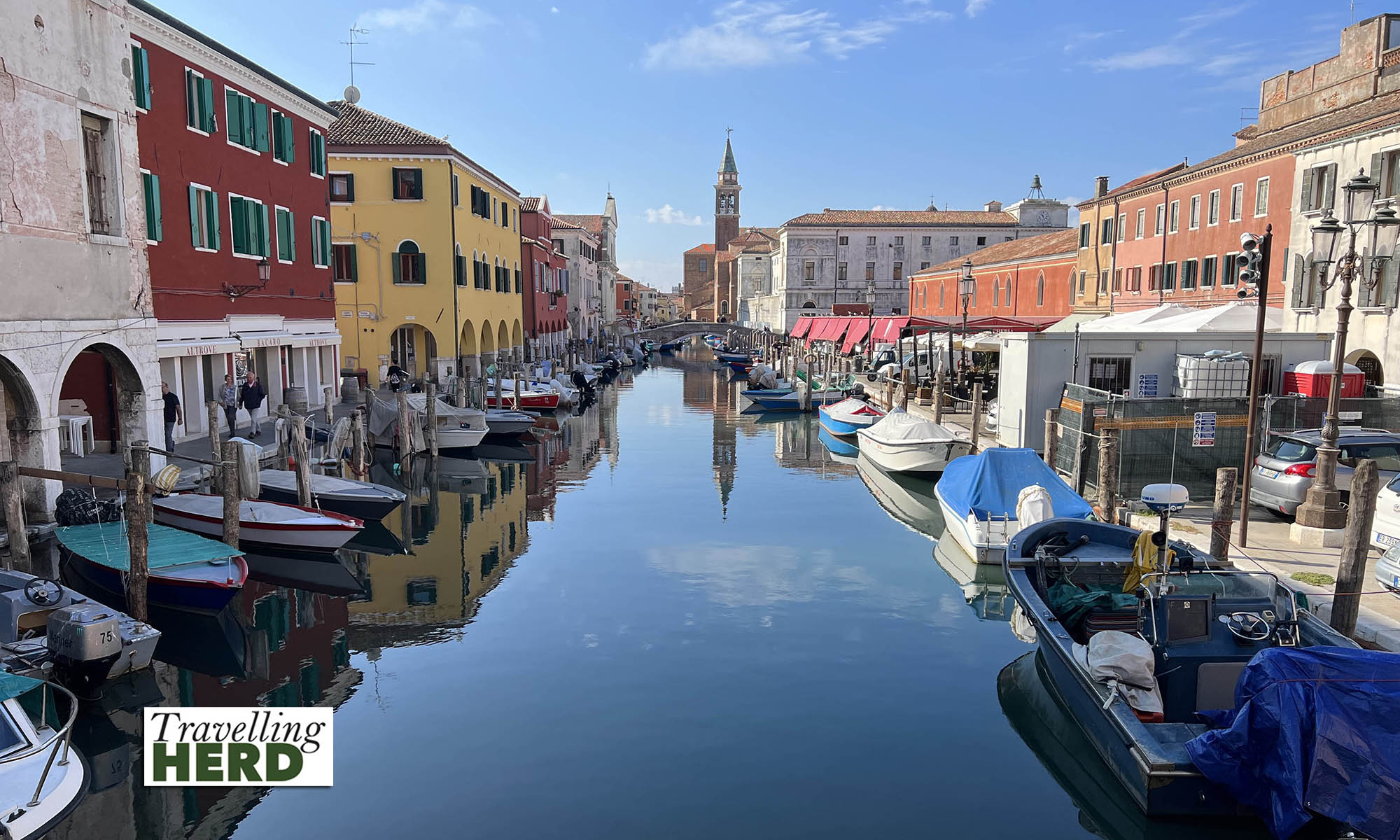