Having had a drive around the city sights to get our bearings we thought we would walk a similar route towards the Hassan II Mosque for views across the rocky strata to the lighthouse. . .

On the drive the previous day Matilda had noticed “Rick’s 1942” which had a sign outside announcing it would be “opening soon” as the “ultimate tourist experience”. This is a bold claim indeed given it is up against the Hassan II Mosque.

From the outside it seems to have sufficient space to make it appear more like the film set version than the one we visited last night. No doubt it will be a success as people [Matilda included] will want to pay their own small tribute to the enduring appeal of this iconic movie.

We decided to visit another of the recommended restaurants for our evening meal, this time with a Spanish influence. The meal, the service and the ambience were all excellent.

The following morning we had a train to catch from Casablanca to Rabat, the capital of Morocco.

Our carriage for the journey to Rabat was in an ex-SNCF 1970s Corail.

The journey from Casablanca Voyageurs is 54 miles and takes 52 minutes [just over 60mph average speed]. The seats in first class are very comfortable.

As we travel through Rabat Agdal station we spot one of the newer TGV style trains that are now being used on the railway routes in the north of Morocco.

Having checked in, dropped our bags and admired the view from our hotel room on the banks of the Bou Regreg River at one end of the Hassan II bridge. . .

. . . and then walked to the Hassan Tower which was declared a UNESCO World Heritage Site in 2012.

In 1195 Abu Yusuf Yaqub al-Mansur, the third Caliph of the Almohad Caliphate, planned to build the largest mosque in the world with the world’s largest minaret. Construction stopped on his death in 1199 and in 1755 the Lisbon earthquake destroyed much of the colonnades. It is nevertheless an extraordinary site.

Mounted guards secure all the entrances as the complex now includes the Mausoleum of Mohammed V, who is known as the father of Moroccan independence, in fact he declared independence from France here in 1956.

The Mausoleum was commissioned by his son Hassan II and built between 1967 and 1971.

Between the tower and the mausoleum, there are 348 surviving columns in regimental rows.

The current tower is 44m/140 feet high which is about half the height originally planned.

The columns have survived at varying heights and are almost like a plantation of petrified trees.

We then walked down to the river front where Le Dhow . . .

. . . a restaurant/bar on board a ship, provided us with welcome liquid refreshment . . .

. . . and views across to the Kasbah beyond.

As we were on the opposite side of the river to our hotel and we had seen various people taking a river taxi across, we wandered along the riverbank to see if we could do the same. The barman had suggested the fare was 7 Dirham. Matilda was rather concerned to a see the number of people already on the small boat but Robert blithely climbed aboard and she felt she had to follow across several boats, encouraged by kind and helpful fisherman. The crossing was thankfully uneventful.

From the terrace at our hotel we were able to watch the sunset across the river, beyond the Hassan Tower. 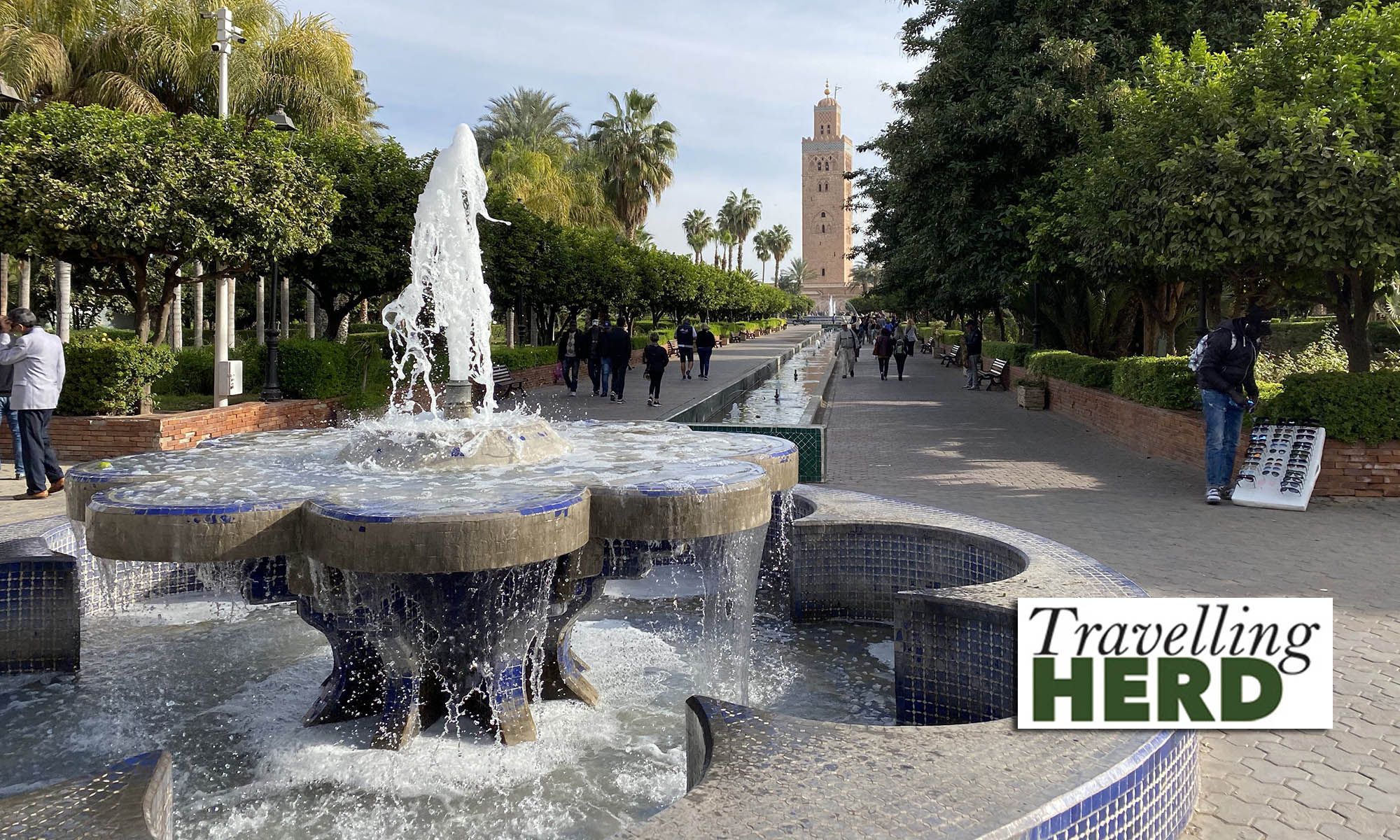 Thursday, 14th November 2019 Following a leisurely breakfast, we set off to walk round Marrakech. Our walk led us along tree-lined boulevards […]