From Cardiff Central Station we walked a short distance around the Principality Stadium along the bank of the River Taff to check in to the Holiday Inn.

There are several Victorian covered arcades which provided some shelter from the rain as we started to look round this historic city.

There is also a Victorian glass-covered market which opened in its current position in 1835. Although this is not as splendid as some we have visited, it did include the extensive Spillers record store on the upper level.

We had decided we wanted to visit Cardiff Bay which is a little way out from the centre and which you can travel to by river taxi: the journey takes about 20 minutes.

There is an informative commentary onboard but unfortunately the rain on the windows, coupled with a slight delay on the audio, meant that it was difficult to make out the landmarks which were being pointed out to us as we passed them. Sights included the white clapboard Norwegian Church, now dismantled, relocated and re-opened as an arts centre, where Roald Dahl and his family worshipped.

As we disembarked we asked a member of the crew when the last boat would return to the city centre but he was reluctant to give any assurances whatsoever as it was based on the weather and was the port authority’s decision. We were glad we had asked as this allowed us to plan alternative transport home.

When we arrived at the bay, the rain was lashing down and the whole area around the Millennium Centre [below] seemed to be more or less deserted.

We could imagine that in fine weather the fake beach; the Ferris wheel; the fairground rides and the water pools would be full of small children enjoying themselves, while the waterside bars would hum with conversation accompanied by the clinking of ice cubes but while we were there it was just a little bit dismal in the wind and rain.

If we return in better weather, we will walk the Cardiff Bay Barrage, built during the 1990s between Queen Alexandra Dock and Penarth Head, but the weather was nature’s version of dermabrasion and so we went into a cafe/bar to dry off before returning to the hotel.

The following morning, our table for breakfast provided a taste of things to come with a view of the Principality Stadium.

On the other side of the building, our room overlooked the wall around the perimeter of Bute Park and provided a fine view of the walls where carved stone animals peer curiously over the castellations.

These walls were originally positioned directly in front of the main castle entrance but had to be moved when the road was widened to accommodate motor vehicles.

The Wales v England rugby match did not kick off until 14:15 and so we had the morning to take in some of the sights of Cardiff. The weather for the weekend was unpredictable and we decided to prioritise Cardiff Castle: Matilda’s cousin had recommended the tour of the apartments and the clock tower and arriving just after the Castle opened we were fortunate to be able to book onto both of these. Later on we noticed that the queue for tickets was snaking its way out of the front entrance.

The history of the site spans two millennia from the early Roman settlement, Norman occupation and its strategic importance during mediaeval times through to Georgian and Victorian modernisation and redevelopment to providing shelter for local people during WWII.

In the mid eighteenth century, Cardiff Castle passed into the Stuart dynasty, to the first Marquis of Bute, who renovated the main range of the house to create a Georgian mansion, demolishing many of the mediaeval buildings on the site in the process.

The growth of the coal industry made the family extremely wealthy and the third Marquis of Bute invested heavily in Cardiff Docks and commissioned William Burges to create a fantasy castle for him in the city in the Gothic Revivalist style.

It is the sheer decorative exuberance of the Victorian rooms which attract most visitors.

Erfyl was our knowledgeable and entertaining guide for the tour of the apartments which starts in the Winter Smoking Room.

The room itself is richly decorated with time and seasonal motifs, including the signs of the zodiac, the phases of the sun and the seasons of the year as well as images from the natural world. The fireplace is a celebration of love in winter.

Matilda was interested to note that the name Robert, or derivatives thereof, appeared throughout the text adorning the walls in the main hall . . .

. . . including the writing over the fireplace.

The rich detail throughout the rooms . . .

. . . is breathtaking and there has been no attempt to skimp on the gold leaf.

The third Marquis of Bute was deeply religious and even had a cupboard built to look like a confessional [below, to the left of the fireplace] in his bedroom.

The tour also takes you up to a tiled roof garden. Unfortunately wear and tear means that it is no longer possible to have water in the pool as this would leak into the splendid rooms below.

More recently, the library [below] with its rich wooden shelves was used as the location for filming scenes in the library in Dr Who’s Tardis.

. . . the original Norman motte and bailey castle, built on top of a third century Roman fort, which still stands in the grounds and . . .

. . . William Burges’ Victorian flight of gothic fancy with the Principality Stadium beyond.

During WWII the Marquis happily agreed to allow the people of Cardiff to take shelter in the thick outer walls. You can walk through these wartime shelters, accompanied by the sound of the music of the time and Churchill’s broadcast announcing that the country was at war with Germany.

To follow this we had booked a Clock Tower tour. This started outside with our guide explaining the different storeys within the tower, and pointing out such external features as the intricate designs of the gargoyles.

The tour started in the Winter Smoking Room at the bottom of the tower which we had already visited and we moved up through the flights of stairs through the clock itself, although this had ceased to work a few weeks prior to our visit and a craftsman with the skills to get it going again was proving difficult to find.

The servant’s room was very plain with small high windows, apparently called spiteful windows, providing limited natural light and no view to distract the maid from her work: a stark contrast to the opulence of the public rooms.

The Summer Smoking Room takes pride of place at the top of the Clock Tower and includes all the design motifs found in the rest of the castle: nature, love, time and the seasons as well as greek mythology and the signs of the zodiac.

The room has a gallery and a cupola, letting in plenty of summer daylight.

Here, we were allowed to sit on the sofas to enjoy the ambience and study the rich imagery in the carvings and paintings.

The chandelier was designed to be raised so that the candles would create the effect of stars glittering in the night sky in the evening.

We could also take in the view along Castle Street where the red jerseys of the Welsh supporters were becoming more and more prevalent.

A feature of the column and doorway decoration in the Castle is the inclusion of the tree roots [below left]. At the end of the Clock Tower Tour, and before the match, Matilda insisted that she wanted to return to the main building to look at the decorations in the Arab Room [below far right] which is part of the general tour of the house, but which had not been included on our guided tour.

England, as the away team, had the choice, on the Friday, of having the roof of the Principality Stadium either open or closed for the game. England wanted to have a dry, quick running game so chose to have the roof closed [also their first two games in the upcoming Rugby World Cup in Japan will have their roofs closed]. However, the weather on this Saturday was gorgeous sunshine, unlike Friday’s miserable wet weather, so in hindsight they should have chosen to have the roof open. We have to say that the atmosphere within the stadium was breathtaking. With the roof closed, the sound of singing fans bounces around the stadium. ‘Bread of Heaven’ sung by around 60,000 Welsh fans is an experience.

One of the noticeable differences between Twickenham and the Principality Stadium is the huge number of fans who wear their team colours. The seats were awash with Welsh red.

Unfortunately, the other noticeable difference between the two stadiums is the drinking vessels. Whilst Twickenham uses reusable plastic pint containers which you pay a refundable deposit for (which you can either reclaim or donate to charity), the Principality Stadium provides single-use plastic containers (with compulsory plastic lids). We would guess that a couple of hundred thousand drinking containers were used and needlessly binned during the day!

The match was actually a dull game with not much flowing rugby at all. The result was disappointing for the English fans and there has been a bit of a debate about the legality of the only try which was scored by the Welsh. [In fact, since the game, the International Rugby Board has changed the rules so there is no ambiguity in the future.]

After the game we went for a bit of a pub crawl around Cardiff. The city closes all the roads to vehicles around the centre of the city where the ground is located. There is a wonderful party atmosphere. This was obviously heightened by the Welsh victory. There is great camaraderie between fans of both countries. Robert had thought about changing out of his shirt before going wandering around in enemy territory, but apart from a couple of idiots being a bit abusive we had a convivial evening, striking up conversations with fans from both sides. 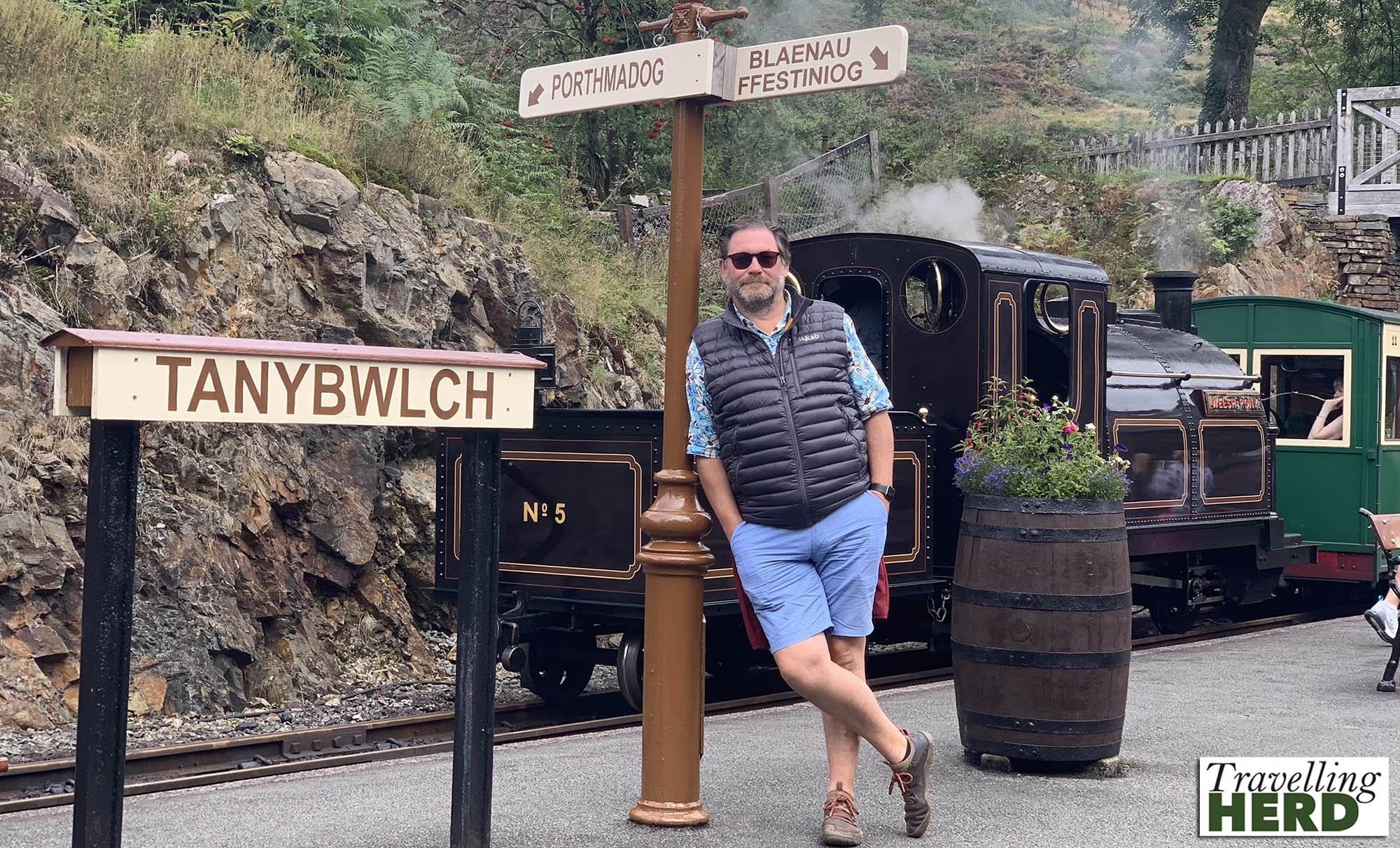 Wednesday 25th August 2021 Allow us to preface this post with an apology. Those of you who are keen followers may notice […]