An early swim before breakfast helped to get the day off to a healthy start. Following Robert’s friendly criticism of her backstroke technique yesterday, Matilda googled this and realised she was using the recreational technique, not the racing technique he was recommending.

Looking in the wardrobe we found bathrobes and slippers for the pool which we had overlooked yesterday. Even though we got to the pool at 07:00, there were already several people there before us including a coach training several young swimmers: Matilda, always open to constructive comment, tried to interpret his arm actions to help improve her backstroke technique, but will probably stick with the recreational approach.

At breakfast we realised we were sharing the hotel with the Austrian and Norwegian youth judo teams as well as those from several other countries which we did not see. This explained the signs to the “unofficial weighing room” on the mezzanine floor. The signs were positioned by the lifts and seemed to suggest these might become overloaded. In fact, the Cluj-Napoca Junior European Cup 2018 – International Judo competition ran from 11 August to 12 August, 28 countries and 290 competitors were involved.

Although on the train journey in, Cluj seemed to be quite sprawling with a fair number of industrial buildings on the outskirts, the centre itself is quite compact.

Given the number of steps on the return climb up to the hotel – over 250 – there was no chance we would be popping back for anything during the day.

There is a restaurant part way up/down and we looked at the menu to see if eating there would be an option: this could provide a welcome break on the ascent at the end of the day. The restaurant has good views over the city from the opposite direction from last night’s restaurant and we both identified something to eat.

Descending the steps to the centre, we walked over the Somesul Mic river and to the main square to look inside the Roman Catholic St Michael’s church. The monument to King Mathias in the square is imposing.

From there we walked past “Bob’s church”, where a small black cat was stalking the pigeons and caught one but was flustered by the excessive flapping of wings and released its prey, and on to Plata L Blaga and Plata Stefan cel Mare, passing more churches, a small market and a fountain, which judging by the quantity of pumps and jets would be quite spectacular if it held any water.

Again there are churches from a range of denominations in various states of repair and renovation boasting domes and cupolas of different designs, shapes and colours. The Greek Orthodox Church, which was not quite finished, was particularly splendid with modern mosaics decorating the walls. Unfortunately the photo did not come out.

We made a stop to rehydrate and take the time to work out what to visit next.

Feeling refreshed we walked past the monument to the revolution against communism with our hotel visible in the background: the fact that it can be seen from various places across the city does nothing to make the walk back seem less daunting.

In 1827, the far-sighted Women’s Welfare Association leased some land to provide the people of Cluj with a recreational space including a music pavilion and summer theatre. This is now the Parcul Central. At the end of the 19th century the Casino was built here. Over the intervening years, this has been used as a casino; museum, school of fine arts and restaurant. It overlooks Lake Chios where you can rent hydro bikes in the shape of flamingoes, dragons and VW beetles.

Now we don’t think that we have seen this ever before, but as you walk through the park there are black straps, with a metal ring on, wrapped around most of the trees in a section of the park. According to the guide book Cluj-Napoca is “a city in which hammocking is encouraged”. The black straps are called TreeHuggers and they are designed to protect the trees. You just bring along your hammock, clip it to two trees and then “enjoy the shade, the sun, the moments of quietness right in the middle of the city”.

It is very noticeable that all the cities we have visited so far on this trip are quiet and peaceful compared to what we are used to.

Following another hydration stop, on to Museum Square, also called the Small Square. This was the centre of the fortified medieval city but we did not find this as obvious or prepossessing as the guide books imply.

Matilda had read that there were still cannon balls embedded in the south side of Saint Michael’s church and so we returned to Plata Unicii for a cool beer and to see if we could spot them.

We then climbed half the way up the hill to eat. The rest and food were most welcome. There was a group of boys in sports clothing running up and down the steps as some form of training. It looked like torture. As we sat there, the views were impressive but the sky darkened and it began to rain so the clear sides of the Pergola had to be drawn.

Lesson for the day: Hotel slippers are dangerous when worn next to a swimming pool. Saturday, 18th August 2018 After breakfast we took the metro to see Ceauşescu’s Palace which is an extraordinary monument to one man’s power […] 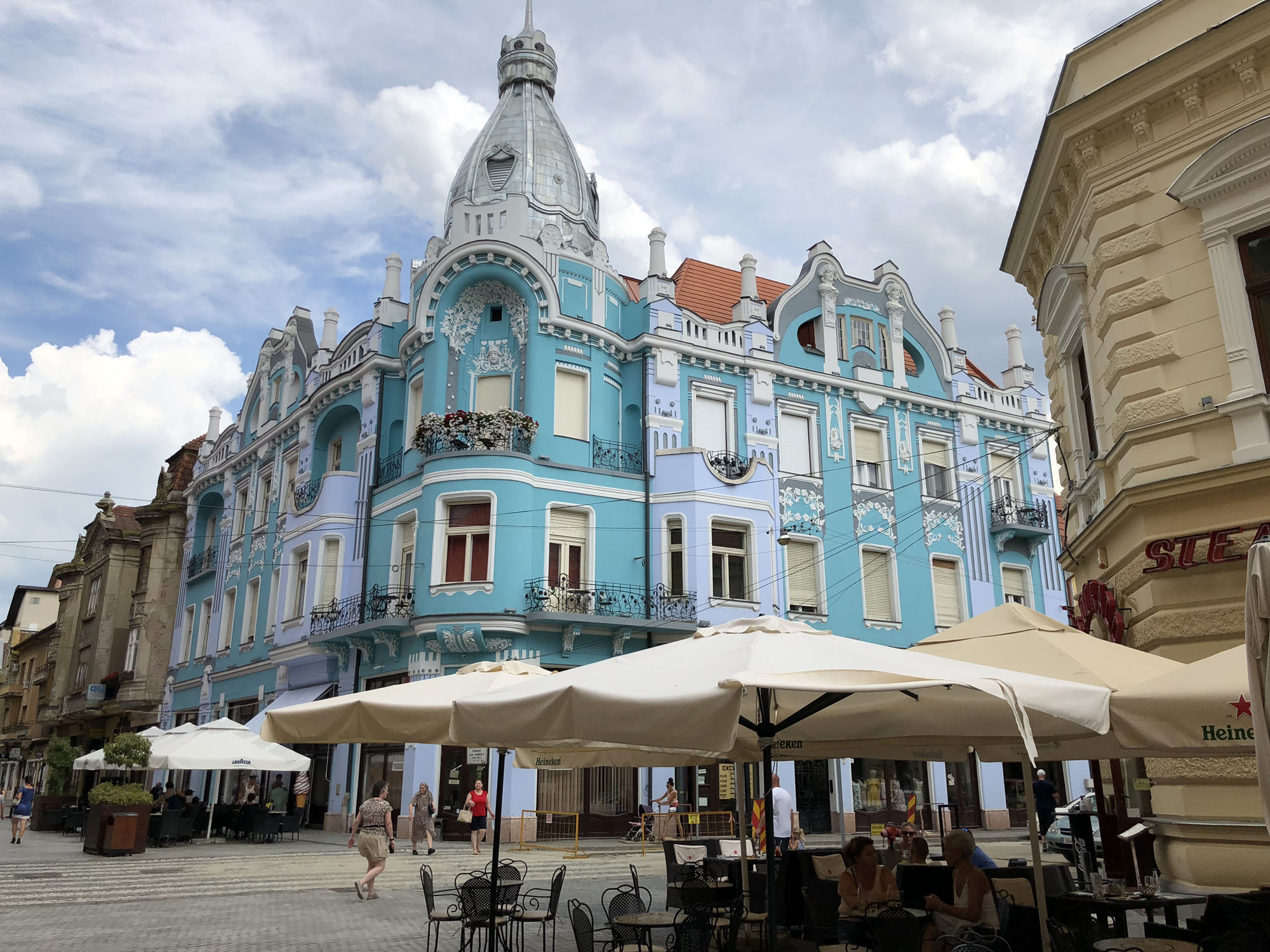 One thought on “Cannon balls in Cluj-Napoca”